We interviewed Vinay Kanchan. He is a trainer in the art of creative thinking, a brand ideation and strategy consultant, and an author and writer. He is also patron saint of Juhu Beach United, a footballing organisation which celebrates, ‘the unfit, out of breath working person of today’. He has done his MBA from Narsee Monjee Institute of Management Studies. He is a B.E. (Electronics) from Fr. Conceicao Rodrigues College of Engineering (Mumbai University). 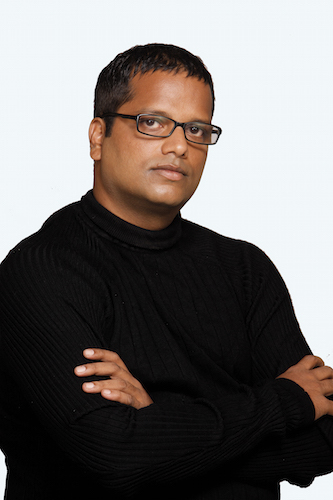 Achievements for his book:

DNA nominated ‘Lessons from the Playground’, amongst the ‘14 must read management books of the year’

‘Lessons from the Playground’ featuring as a CROSSWORD and Amazon Best Seller in the Management Space, from time to time

‘Lessons from the Playground’ is also being added to management libraries

I was always a bit of a story teller. As a child, I was fascinated by imaginative tales. It was only a matter of time, before I put pen on paper. I wrote my first story at the age of seven; however that remained a fiercely guarded secret. In school I penned a play, lampooning a then cult series Star Trek. Then for a while lost touch with writing, as I acquired professional qualifications, but the urge used to surface from time to time, until ten odd years ago, it came back to stay.

Essentially the potential of words to transport you into a different world; was the particular facet of the craft, which always inspired me to write.

I was particularly fond of comics, from super heroes to Tintin, Asterix and Commandos and of course Amar Chitra Katha. Even perused a lot of Chandamama, where I liked the Vikram and Vetal stories.

I used to also consume Enid Blyton, The Three Investigators, and The Hardy Boys and so on in school. Sampled a bit of Dr. Who then and found it absolutely fascinating.

At the outset, it is the very fundamental thing of writing in the first place. Everyone has a book idea at some point of time in their lives. Only a small fraction of those people actually end up penning their own book.

The rigor and discipline involved is immense, and often the book seems to dally and linger at points, refusing to move ahead. The ability to stay with the task is a huge one, and this stubborn refusal to give up is what brings books to life.

Then there is the search to find the right partner, in terms of one’s publisher. That itself takes six months to a year (sometimes more). It is a period where responses are very slow in coming. Faith and belief in one’s idea are key traits to wield at this stage.

Once the book is done, another great (perhaps greater challenge looms). That is in marketing the book and getting it spoken about. This again is a whole separate story in itself. And it is a task which authors necessarily need to get themselves involved in.

These days in many ways, actually writing a book is only the start of things. 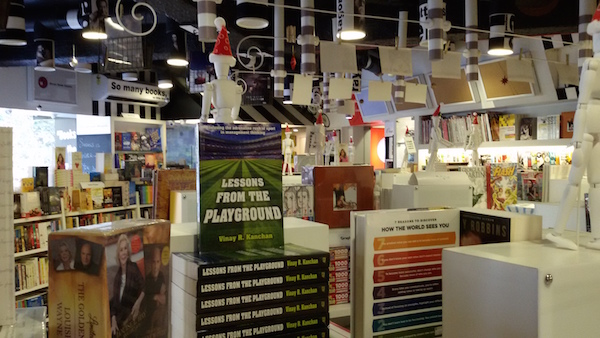 How much research do you do before writing a book?

Me being a sporting fanatic, the incidents which feature in ‘Lessons from the Playground’ were rather vivid in my memory. However I did peruse the internet and other book references to establish the factual veracity of things.

The managerial parallels involved a lot of reading from the management sphere. But a lot of it was done over the years. Not specific to the time of writing, though the insights came pouring back to dovetail wonderfully.

In sum a book which has management implications does entail a lot of research, during the incubation of the idea (where one is unaware of this) and then in its execution.

What motivated you to write ‘Lessons from the Playground’ ?

We are taught in a rather dull, dated and bookish manner. And this is true of most of our temples of learning.

My starting premise was, why couldn’t the whole process of learning be made more fun?

Having had a passionate interest in sport all my life, sport became the natural metaphor to adopt for a first book along these lines, though movies, history, evolutionary biology and many others also readily present themselves.

At another level, whilst working in the corporate world I noticed how dull meetings used to get energised when someone started talking about the match. It struck me that this vitality could easily be transferred to the problem at hand being discussed. If only one was willing to give such a lateral adventure a chance.

These were the motivations in writing the book. Eventually it is about the stubbornness of a fan to not let the inspiration of sport, die out after the match concludes.

Can you tell us more about your latest book ‘Lessons from the Playground’?

‘Lessons from the Playground’ is an honest attempt to infuse the adrenaline rush of sport in management thinking. It has been structured along a new set of ‘4P’s’

People- The first section represents sporting heroes like Pele, Ali, Jordan, Tendulkar and Federer, and seeks to uncover what the corporate world can learn from the life of these champions.

Platforms- The second section dwells on the great stages in world sport like The Olympics, The World Cups, and Wimbledon & so on. It looks at what management think tanks can embrace from these cauldrons of human potential

Processes- The third section looks at the various processes which sport throws up, from rituals like the ‘Hakka’, to sound bytes emerging from on and off the field, and ideas which transformed cricket, Barcelona’s playing style plus the leadership philosophies of some iconic captains.

Pinnacles- The last section celebrates the once in a lifetime, epochal performance; like Bannister’s sub four minute mile, Phelps at Beijing, Maradona in the 86 World Cup, Martina at Wimbledon and Kapil Dev’s towering 175 not out in the 1983 World Cup.

In all cases, sporting anecdote is interestingly tied back to management concept, making it a very breezy, fun filled and inspiration inducing read.

How did you come up with this idea? Of management genre book with learning from sport?

Creativity is ultimately the art of putting together two unrelated concepts to kindle a new understanding. Having been close to both spheres-sport and management, this juxtaposition seemed an absolutely normal and self-evident one for me.

It was a book which I simply had to write at some point in time.

Who are your favorite authors?

How much time do you dedicate to writing on a day to day basis?

My daily writing is mostly in the form of Facebook posts, which helps crack my knuckles and exercise my writing muscle. They also help me gauge what is trending, and allow for ‘micro experiments’ in genre.

I try and have a certain number of articles in the media space as targets for every month. And though I don’t always achieve that, it keeps me writing on a fairly frequent basis.

Perhaps the one thing I would like to say is learn to listen and regard your own inner voice and judgment.

Don’t go all over the place, looking for inspiration.

Writing is a very personal adventure. It only works when you have the confidence that your perspective is interesting and unique. It is a journey of self-discovery and development. It improves and changes the writer as it goes along. And unless you are willing to completely give yourself in to the ride, you are not going to enjoy it.

Thank you for your time. You can buy his book:

He likes to read inspirational books. He is a Professional Blogger, Entrepreneur and a power networker. By education he is a Computer Engineer and by profession he is an Online Marketer.
@niktalk
Previous Summerita Rhayne Interview – Hidden Passion: Kamboj Princess Rukmani Book
Next Andaleeb Wajid Interview – Time Will Tell Book of The Tamanna Trilogy