Shantanu Guha Ray is an investigative journalist having over 3 decades of experience in journalism. He studied from Wharton School. He won various awards for his work in investigative journalism which includes Laadli Award, Wash Award and Ramnath Goenka Award for excellence in journalism. He also won the prestigious Washington Press Club Award. The Target is his third book and previously he has written Fixed! Cash and Corruption in Cricket and Mahi: The Story of India’s Most Successful Captain.

Writing is natural for any journalist. I have spent almost three decades in the profession, working on political, human interest, business and investigative features. In all these years, my work has taken me across India, and across the world. I have got inspired by great writers, and their brilliant works. In faraway Geneva, I once met Seymour Hersh, the man who has scooped the My Lai massacre of villagers by US soldiers during the Vietnam war. He was extremely humble, sat for coffee with me and a friend, Murali Krishnan, and told me that journalists must always write book, pick up the human angle of subjects they chose to write. I followed his words in toto, my first book on the then Indian cricket captain, MS Dhoni, talked about his life, rather than his cricket.

I grew up with Phantom and Tarzan comics, also loved reading Tintin and Mandrake the magician. Premchand and Rabindranath Tagore inspired me, I loved books by Dominique Lapierre because of his human touch, I was in Kolkata when City of Joy was being filmed. I have liked Sashi Tharoor and Amitava Ghosh, their writings are brilliant.

To find time to sit with papers, else before the computer.

Immense. Research is the base of my work, almost like the foundation of a home on which a house would be built. In each of my books, I have three of them now, I have spent both time and monies to get my research in place. Its the most difficult job, more difficult than writing exclusive bits in the book. 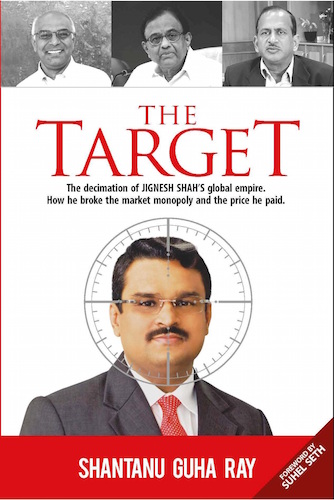 What motivated you to write the book “The Target”?

As an investigative journalist, I followed the NSEL payment crisis despite being in Delhi – it was a Mumbai-centric payment crisis – and felt much more was hidden beneath and the truth was not told by many, including the media. I worked on the subject first for the cover of a legal magazine, and then slowly worked towards the subject. And what I found was mid blowing.

Can you tell us more about your latest book “The Target”?

It show how one of India’s finest entrepreneurs, a visionary tycoon was crushed because he was growing big, making name for himself and millions who benefitted from his companies (read exchanges). The enemies of Jignesh Shah almost crushed him out of shape, out of business. They did not realise Shah created what the Indian Prime Minister, Narendra Modi, is talking now (Make In India). If those exchanges had remained and functioned the way it were under Shah, India would have been proud. But it did not happen. Why, you need to read the book to understand the devious ploy of those who live in the corridors of power in Delhi and Mumbai.

How did you came up with the idea of writing non fiction genre book?

As a journalist, I have always chased news, which is non-fiction. Fiction is not my cup of tea. I can see, I can interpret what I see. But I cannot dramatise.

I spend two hours in news gathering and reporting, another two hours for writing up chapters for my book.

You can order the book now:

He likes to read inspirational books. He is a Professional Blogger, Entrepreneur and a power networker. By education he is a Computer Engineer and by profession he is an Online Marketer.
@niktalk
Previous Mudit Bansal Interview – Pankh Book
Next Vibha Batra Interview – Glitter and Gloss Book