Sangeeta Bahadur is an author of Vikraal. Let us know more about her writing. 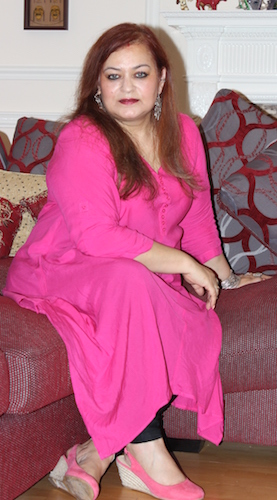 I grew up in a house full of books, with a father who was a voracious reader. So the curiosity about books and how they get written was always there, ever since I can remember. Then, when I was around 12, my father got posted to Kanpur and that was where it all began. I became great friends with this girl who was a few years older, my senior in the same school and very talented. She could dance, sing, draw and – to my amazed delight – wrote these wonderful novels in Hindi, by hand in school notebooks, complete with beautiful covers designed, sketched and painted by herself! As I avidly read each one of those spellbinding tales, I began to wonder if I could do that too – create stories and characters and bring them to an interesting dénouement. A year later, I began writing my first novel by hand in a school notebook – just like her, but in English, since I was more comfortable in that language. We moved out of Kanpur shortly thereafter but my passion for writing only blazed stronger. Over the next decade or so, I must have written at least a dozen romances which became increasingly complex and layered as I grew older. Although I never sent any of them for publication, having no idea how to go about it, they became extremely popular with friends in school and college. So much so that when my first book, Jaal, was published in 2012, the standard initial reaction of all old friends was, “What took you so long?!”

I don’t know if my Kanpur friend ever went on to become a published author – we lost touch a long time ago – but I have always credited her with uncorking the writing genie bottled within me!

The first book I vividly remember reading and loving was Alice in Wonderland, followed by a series called Mayadweep – a beautifully written fantasy in Hindi for children. I don’t remember the author’s name now, but I do recall that I never could find the last part of the trilogy, and still often wonder what happened in the end! By the time I was 8 or so, my father decided that I was old enough to move on to the classics. Beginning with books like The Swiss Family Robinson and Treasure Island, by the time I finished school I’d already gone through almost all the classics, from Jane Austen and Charles Dickens to Edgar Rice Burroughs and Alexander Dumas. These were liberally interspersed with detective novels, spy fiction and romances – anything and everything I could lay my hands on. What I didn’t actually read, I heard from my father as bedtime stories that he continued to read to us way into our late teens, imbuing them with his own unique touch of magic.

One principle that was followed unwaveringly in our home was that all reading was good and all expenditure on buying books self-explanatory, requiring no excuses or bargaining. An avid reader himself, my father enjoyed the fact that my brother and I turned into bookworms in our own right – a personality trait that has continued unabated!

Other authors would, I’m sure, have other things to say, but in my case the challenge is to stumble upon the kernel around which the story would be woven. It could be a spark of an idea, or merely a phrase or a scene that suddenly springs to your mind and – voila! – you know you have the genesis of a possible book. Very much like the moment a sperm and an egg come together to create the first cell of what will be a full-fledged human being! Unless that ‘eureka!’ moment happens, there is no story to tell; once it does, the rest becomes inevitable. The plot begins to unfold, the landscape emerges like images from a movie, the characters take birth – and then proceed to take over the tale, pulling me along into unexplored territory and very often ending up surprising me as much as themselves!

For the Kaal Trilogy, a great deal. Like JRR Tolkien’s Lord of the Rings or David Edding’s Belgariad, it’s a completely original heroic/epic fantasy, uninfluenced by any existing mythology or story or character, existing within its own self-defined parameters. So had I only chosen to tell the rip-roaring action-adventure story of a fictional superhero in an imagined world – which, by the way, I’ve also done! – I may have been able to rely on my imagination alone. However, my decision to create a quintessentially Indian superhero, very different from his Western counterparts, led me to ask my husband Yuresh – also my co-conceptualiser for Vikraal – for suggestions on how to do that. He came up with the brilliant idea of delving into the treasure-trove of Indian mystical traditions to orchestrate the protagonist Arihant’s growth trajectory – something that has never been done before in popular Indian fiction. That’s when the research started. Yuresh would give me the spiritual concepts and hand over reading assignments, ranging from Shaivism and the Shakta traditions to secret practices of Tantrik Buddhism and the writings and experiences of Indian mystics, collectively known as the sant–mat.

The concepts we chose were fascinating but also very abstruse, and I’d often sit in front of the computer screen drenched in cold sweat, wondering how on earth they could be incorporate into the story without breaking the flow or sounding preachy. A few hours later, I’d emerge from the fog of terror and excitement to discover that somehow, what I’d read and only half-understood had been processed somewhere within me, and had re-emerged on paper in an incredible amalgam that can only be described as mystical adventure! That’s why I often think of the Kaal Trilogy as an ‘inspired’ tale – something I couldn’t possibly have written without divine grace. 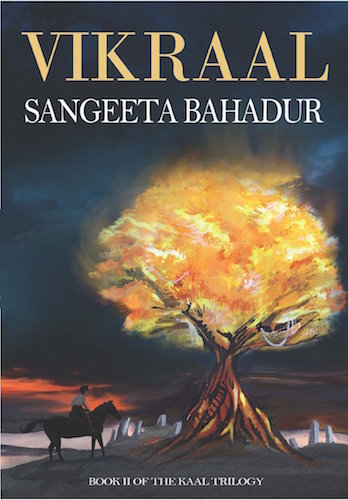 What motivated you to write the book “Vikraal”?

How did you came up with the idea of writing mythological fiction genre book?

Vikraal is the second book of the Kaal Trilogy, which began with Jaal and will end with Mahakaal. The question, hence, would apply to the series rather than to Vikraal, or even the first book, Jaal.

Although I’d read several classic fantasies as part of my growing up process, I discovered the brilliant genre of Speculative Fiction much later in life – and was instantly hooked. These books created an entire world from scratch and pulled you into its depths, introducing you to mint-fresh stories, unforgettable characters – many of them of the non-human variety! – and twists and turns that left you begging for more. Authors like David Eddings, Raymond E. Feist and Terry Pratchett became my heroes. I found myself wondering why no Indian author had ever attempted this genre, which was very different from the regurgitation of Indian epics and mythological characters that had been going on for a while.

That was when the idea of Jaal was born – a tale set in a world similar to that of Vedic India but with its own completely imaginary matrix of history, geography, socio-political tenets, religions and strategic compulsions. The protagonist would be a superhero, I decided, but completely Indian in that his powers would come from an inner unfolding of potential rather than as a gift of alien/mutated genes or technology. Once I began writing, I realised that the story flowering in my mind – essentially that of a fully realised human confronting and overcoming an immortal but deluded God – was too vast to be encompassed in a single book. The answer was a trilogy. That’s how Jaal, and then Vikraal came into being. I am now in the process of writing Mahakaal, which will take the reader beyond Time itself and beyond any final frontier of the mind or the soul.

Can you tell us more about your latest book “Vikraal”?

Ans. As I have already explained, Vikraal is the sequel to Jaal, in which the seeds of the world of Kaal and the story of an alternative universe created by the Gods of the Chaturaanan – Divine Quartet – were sown. The tale begins long before the actual narration, when the deluded God Aushij, the Lord of Maya, chooses to break away from the harmony of the Quartet and attempts to recreate the universe in his own image. The celestial war that follows almost destroys creation before Aushij’s siblings – the other three Gods of the Chaturaanan – manage to lure him into a Prison of Dreams and trap him within. Even in the moment of entrapment, though, they know that the imprisonment can only be a temporary respite; they cannot destroy him since he is immortal, just as they are, and his powers equal theirs. That is when the three Gods beseech the Cosmic Spirit to create a divine weapon capable of confronting and curbing a God. The only answer is a human being – the only created entity in the universe capable of growing beyond godhood by achieving his/her full potential. After several millennia of experimenting with and learning from flawed possibilities, the cosmos finally creates the Probability – Arihant. Born into a world ravaged by fire and blood, where Aushij is already on the verge of consciousness, Arihant is raised by foster parents under a cloak of anonymity. When Jaal opens, he is a gawky adolescent just beginning to discover his nascent abilities, surprised and intrigued by the unfolding. As he grows older, a series of events and experiences lead him to the realisation and ultimate acceptance of his purpose. The cosmic design brings him to a succession of most unusual gurus, who help unravel the threads of his being to answer the increasingly complex levels of the questions he constantly asks himself – Who am I? What am I? Why am I?

By the end of Jaal, Arihant overcomes his physical limitations, turning into a veritable young god and getting rather cocky about his powers and abilities. You actually begin to feel sorry for his human and non-human opponents – till he meets his nemesis in Vikraal, and has the tables completely turned on him! Unaccustomed to the humiliation of defeat, he loses all confidence in himself, his powers, his destiny, even in the bonds of love. That’s when one of his gurus returns to guide him to the next step of his evolution – the transcending of his mental limitations in the realm of Kaal, the Time-Keeper of the universe. Despite Arihant’s decisive leap onto the next level of potential, though, Vikraal ends on a note of intense tragedy, paving the way for a devastated Arihant to cross the final frontier of spiritual limitations in Mahakaal.

Woven around this main motif is a whole vibrant tapestry of a living, breathing world of empires and kingdoms, divine will and human determination, strategy and statecraft, political equations and socio-cultural mores, love and friendship, greed and generosity, betrayal and sacrifice. The myriad characters you encounter are protagonists of their own stories, each of which flows into and blends with the story of Arihant, the Beloved of the Gods, lending it contour, depth and texture.

He likes to read inspirational books. He is a Professional Blogger, Entrepreneur and a power networker. By education he is a Computer Engineer and by profession he is an Online Marketer.
@niktalk
Previous Anjali Kirpalani Interview – Written in the Stars Book
Next Suddhabrata Deb Roy Interview – A Poision Called Love Book