Amar is a husband, nature lover, and author of the Amol Dixit series of fiction books. He spent nearly a decade in the United States working in construction before he returned to India in 2008. While his day job keeps him on the road most of the time, he is trying to squeeze in writing into his daily schedule and is wrapping up his latest novel titled Urban, Sophisticated.

Not to sound too clichéd, but I have been writing since schooldays- a poem here, an article there. And of course, writing reports first as a graduate student, then during MBA and later as a consultant does hone one’s writing skills.

But I took up writing more seriously around 2011, when I started writing NRI: Now, Returned to India. And the main reason why I took up writing was my wife. She thought I had a writer in me, and for a change I listened to her. And I am glad I did! The feedback for my debut book has been encouraging, and now I am planning to write a four part series revolving around Amol Dixit’s life.

I have been a read-o-holic since I was a child, if a term like that even exists. There were three phases during my boyhood when it comes to reading. The first was Diamond Comics and Lotpot, these were in Hindi, including Chacha Chaudhry and Sabu. When I was about 10, I started reading books, and I mean some serious reading- both in English and Marathi. These were books like Treasure Island or Robinson Crusoe, or Marathi translations of similar books. When I was twelve or thirteen, I got introduced to Jeffery Archer, Alistair McLean, Robert Ludlum and Ken Follett. So there was a lot of fiction- spy novels, for example.

Each stage of book writing has its own set of challenges, be it developing the outline, the first draft, editing, proofreading, publishing, or marketing. But overall, the greatest challenge I have found is in answering the question “Why do you want to write a book?”

Some of the answers one may think of are: you want to be famous as an author, you are looking to make some money, you want to share your story with the world, you want to add some meat to your Professional profile, the list can go on. And many if not all of these reasons are good reasons to write a book. But one also has to remember that a 50,000 word novel may take nearly 100 hours of your time from the first draft to the proof copy. So that is a significant investment of time that one will have to make to get the book published. Those 100 hours could mean less sleep, less time spent with family, cutting down on social engagements, and a lot of other sacrifices, not to a lot of hard work and even frustration when things do not go right.

But it is extremely important to answer this “Why?” I thought long and hard to answer this question for my first book. Once I knew my why, the rest of the process became less daunting and demanding.

For NRI: Now, Returned to India, the research required was quite less. I had the storyline ready, and the setting was familiar: Pune and Mumbai. However, I had to get the facts right- for example, there is a section where Amol Dixit, the protagonist, meets potential life partners. I had to do a bit of research again on the matrimonial websites to see what type of profile(s) are posted. I had to give a heads up to my wife before I did that to avoid any troubles down the line. In fact, sometimes we would go through old emails and look at the profiles of eligible women to look for elements that could be added to the novel.

For the sequels, the setting is significantly different. For Urban Sophisticated, there was a lot of research needed, because Amol ends up joining a totally different sector for his work. Kidswear is an area that I am not familiar with, and I had to talk to professional in textiles, social scientists, startups and associates in retails stores to understand more about the market. We even conducted an online survey to learn how parents buy clothes for their children, and what some of their challenges and frustrations are. 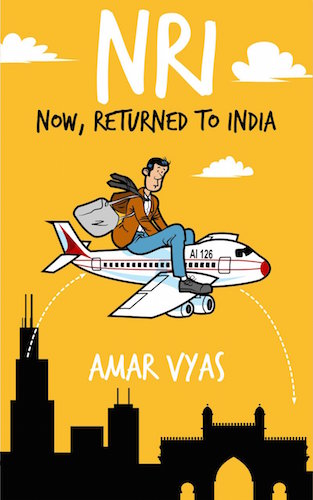 What motivated you to write the book “NRI : Now, Returned to India”?

There were two factors that motivated me to write NRI: Now, Returned to India. One was the overwhelming response I received from the members on the Return to India Forum (www.r2iclub.com) where I used to post my blogs – it was a sort of an online diary that chronicled my experiences upon returning to India. Many of them had suggested that I should write a book based on my experiences. That got me thinking, “why not?”

The second is more personal. Somehow, a lot of negativity had built up within me over the years and I thought that creativity, in my case writing a book, will help me get over the negativity. Coming back to my earlier comment “why should I write a book?” I was going to offer them something that they would cherish in return for the three or four hours they would spend in reading my book.

Can you tell us more about your latest book “Urban, Sophisticated.”?

Urban, Sophisticated will appeal to aspiring parents, or those who have had children in recent years. This is the third book in the series, but we decided to publish it before the second book, titled The Learning Curve.

Coming to Urban, Sophisticated: Amol works for a retailer who sells kids clothing, and by a twist of fate, Amol ends up becoming a merchandiser, that is, the buyer who places orders with the manufacturer. For two quarters, his estimates go wrong: girls’ clothing is sold out in cities, while the situation is reverse in smaller towns. One day, he makes an interesting discovery that will not only help him with his work, but also impact him personally because he is thrown into an unexpected situation. I thought about this plot in early 2012, and now that I am working on the details, there is an element of e-commerce versus retail stores that is also a part of the story.

I did not even know that I was going to write fiction when I started out, it just happened by accident. The storyline of Amol Dixit in NRI: Now, Returned to India is quite similar to my own life, so even a memoir could have been possible. But I thought of adding some characters, and scenes that would make more sense in a fiction setting than say a memoir. Fiction also allowed me to take liberties- for example, mixing character traits of two or three people and merging them into a single character like Gyaani Baba.

When I finished writing NRI, the question that came to my mind was, “What happens next?” with Amol, what about M, his wife, and so on. That’s how the idea of the series came about. And because NRI… was a fiction, so were the sequels.

Having said that, I am working on a couple of ideas in the nonfiction genre that we could talk about in the future, say in a year’s time.

My favorite and most inspirational writers are P G Wodehouse and P.L Deshpande. I think I started writing in humor because of them.

I travel four or even five days a week, and working on remote sites for long hours makes it difficult to stick to a schedule. But I do try to spend an hour every day in writing or researching for my books. These days I have started recording my ideas into my phone and uploading them on Evernote, so that the information is readily available when I start writing. I also write on flights. Two hours of nearly undisturbed writing every week is a hidden benefit of flying.

I am hardly qualified to offer words of wisdom, but let me say this: one needs to be aware that writing is not a cakewalk. It means a lot of hard work, a lot of frustrations, and a lot of patience before one achieves success. Be clear about what success means for you – is it sales, reviews, number of books published, or money earned. In most cases, the last will take the maximum amount of time. Keep a daily writing schedule, let the words build up. That will only help you in refining your writing skills.

He likes to read inspirational books. He is a Professional Blogger, Entrepreneur and a power networker. By education he is a Computer Engineer and by profession he is an Online Marketer.
@niktalk
Previous Saurabh Garg Interview – The Nidhi Kapoor Story Book
Next Umi Sinha Interview – Belonging Book